I think it was around this time last year that Lance offhandedly told me he applied for this job in Kansas.  As interviews progressed to a job offer…and conversations switched from “if we move…” to “once we move…” I started to get excited about moving to Kansas City and wanted to learn more about the city we would soon call home.  So naturally I sought out some KC area bloggers!

I think I started following Brittany’s blog well before moving to KC was even on our radar.  I can’t recall exactly how I found her blog but it was one I enjoyed following as she has a little boy about the same age as Jack and she is from the Midwest… so yeah no-brainer.  I remembered that she lived in the KC-burbs and so I started to pay more attention to her posts and commenters… which is how I came across Sarah’s blog (Seeing All Sides) and quickly added it to my feedly-reader to stalk when I had time.

Well turns out moving and having a baby take up a lot of good blog stalking time…so it wasn’t until more recently that I started to follow Sarah on Instagram and regularly read her posts.

Fast forward a few Instagram and blog comments later and last week Sarah tagged me in a blogger award! 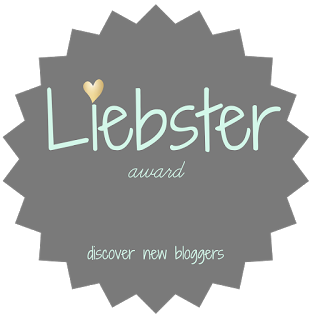 Now given my horrible consistency in blogging normally I wouldn’t even attempt to do it…but since it’s Sarah and I’m quickly becoming her biggest blog/Instagram fan (too creepy?!) I figured what the hell.  Plus I had already answered all the questions as I read through hers…so here goes.

11 questions followed by 11 random things about me:

1. Why did you start blogging?

I actually started blogging as a way to document planning our 2010 wedding.  Wedding blogs were just getting big so I jumped on the bandwagon to keep me busy during our 20mo engagement.  I also knit obsessively at the time and was about to run my first half marathon…so that’s where the title comes from.

2. How has your blog changed through the years?

Oh man…more like how hasn’t it changed?!  I used to post weekly in the beginning with just random planning tidbits here and there.  Then after we got married and bought a house I did more DIY/home posts. Then I got pregnant and documented that as much as I could.  Then Jack was born and blogging got put on the back burner and this space has been sorely neglected.  Overall I think my posts have become more personal since having kids and I’ve looked at it more as a journal than just sharing my day-to-day.

3. What is your favorite post and why?  Provide a link to it!

This post still sticks with me.  I really struggled with becoming a Mom and it took me a long time to admit that to myself.

Now my most popular post by far is Jack’s Nursery.  It has made the rounds on pinterest and I still get multiple clicks daily because of it.  Actually I’m pretty sure that’s the only reason anyone actually looks at my blog.  It’s even in a video on Parents.com.  That and my “real bride” stint on EAD are my blogging claims to fame.

4. What have you learned through blogging?

I think I’ve learned how to put myself out there more.  I still feel weird when someone I know mentions they read my blog or saw a post.  It’s ok for total strangers to read about my life but people I actually know?!  Ack!  I’ve gotten better at this and I think it has played into my real life as well…that or I’ve just gotten old and stopped giving a shit.

5. If you could meet one blogger friend in real-life, who would you choose?

I actually have several of these…is that weird?  Emily & Julia were a couple of my original blog favorites (both also blogged about their weddings on Elizabeth Anne Designs)…and I’ve been following along through marriage, babies, and moves via instagram/blogging  and hope to maybe one day meet them if our paths ever cross.

I’d also love to meet both Jessi and Alex…who just happen to be real life friends (to each other) in Fayetteville, AR.  I know we would totally hit it off  and could spend hours discussing beer, running, babies, crafting and football.  I mean I should probably plan a trip down there ASAP because we’re practically neighbors now anyways.

Oh and OBVIOUSLY I’d love to meet some of the local KC blogger gals I follow duh.

6. What is your favorite social media platform and why?

Instagram hands down.  It’s like blogs but quick and to the point…and I can easily get caught up while nursing/pumping.  Win!  I also love following news/sports/beer/TV related stuff on Twitter.  Lance ONLY uses twitter…so I will actually tweet at him if I want him to read/see an article or something.  #marriagegoals

7. What was the last thing you ordered online?

Oh this is actually something fun…cute paci clips and a dainty bow headband from Loved By Sophia Claire.  Because having a girl has totally blindsided me and made me love pink and girly things. I KNOW!!
8. What is your favorite place in your house and why?

At this point it’s a tie between Allison’s room and the kitchen.  We spend almost all our time in the kitchen because there is a giant TV in there (thanks to the previous owners) and Jack loves all the floor space for his race cars, trains, and floor puzzles.  I love the calm of Allison’s nursery and it’s the only room that I’ve had time to really paint and decorate how I like.  I hope to take/post pics of it here someday…
9. What are you most looking forward to this summer?

Getting out and exploring the city!  Oh and summer beers on the deck/patio/tailgates/by the pool/anywhere.
10. What is the last vacation you took?

Almost two years ago Lance and I took a solo trip to North County, California and LOVED it.

11. If you could choose another job different than what you have now, what would you choose?

I love this question because I think about it more often than I should probably.  Not to say I don’t enjoy my current job…I have a pretty cush situation…but I always tell people that I picked the wrong major and if i could go back I would have chosen some form of engineering or computer science.  BUT if we’re talking about total dream/fun job than I would probably pick being a “Brewery Ambassador”…where I would get paid to go to beer festivals, tap takeovers, talk to people, post on Instagram, work the taproom…and oh yeah drink good beer.

And now 11 random facts about me:

Since this post is like a million miles long I don’t have the energy to nominate anyone else so I quit.

Got a question for me?